There are five species of rhino; three are native to Asia and the remaining two native to Africa where they live as the white rhino and black rhino. Those terms are somewhat misleading as the word "white" actually comes from the Dutch Afrikaans "wyd" referring to the shape of its muzzle whereas the black rhino has a more pointed puzzle. Both, in fact, are grey in colour! They are the second largest animal on the continent after the elephant, measuring 11- 15ft long and 5.9 - 6.6ft tall at the shoulder and can live for 50 yrs. The Black Rhino is listed as "Critically Endangered" on the IUCN Red List of Threatened Species as its population has declined some 97.6% since 1960, although now making a recovery from its lowest point of just 2,410 rhinos in 1995 from a  high of some 850,000 at the beginning of the 20th century (see distribution map below). 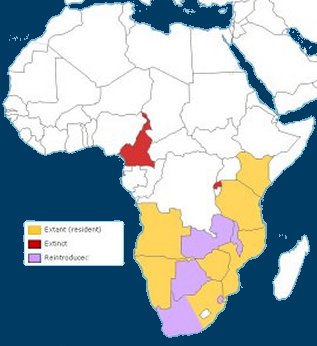 Today the Black African rhino can be found in Angola, Kenya, Mozambique, Namibia, South Africa, Tanzania and Zimbabwe as well as Botswana, Malawi, Swaziland and Zambia where it has been successfully reintroduced. The White Rhino could once be found across sub-Saharan Africa but today its numbers are down to around 11,000, mostly in South Africa and they have virtually been wiped out in more northern areas. The White Rhino prefers flat grasslands whereas the Black Rhino prefers woodlands. Both enjoy waterholes and are most active at night. The African Rhino is a herbivore. Both rhinoceros's (from the Greek words - rhino (nose) and ceros (horn)) are at serious risk from poaching, with their horns seen, particularly in the east, as having medicinal qualities as well as ornamental value and this risk has been exacerbated with the levels of civil unrest across larges swathes of the African continent since the 1960s.

They are attacking beasts (charge first, ask questions later) with a horn made not of bone but from the same material as makes up human hair and nails, keratin, with the largest horn recorded being just under five feet long. If broken off these horns re-grow. They live in "crashes" with a gestation period of 15 months. The young will stay with their mother until another calf is born by which time they are usually fully grown and ready to live by themselves. The female buffalo normally has offspring every two years from the age of 4-5yrs with a gestation period of 11-12 months and the children, once born, remain dependent on their mother for almost a full year. Female calves tend to remain in the herd permanently, whilst the males often leave by the age of four.

Find out all about the animals of Africa with our comprehensive Africa animals information pages.

Watch LIVE webcams from national
parks across Africa and see Africa animals in their natural habitats.

Help keep animals in Africa safe by adopting an African animal and promote their welfare.

A growing collection of Africa resources from posters to screensavers, animal animations and more.