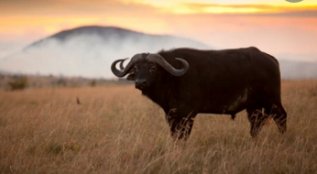 The African buffalo is the continent's second biggest killer after mosquitoes killing over two hundred people every year, many of whom have attempted to hunt the animals themselves then finding they become the prey to the wounded and vengeful beast. Indeed it is said that buffalos never forgive and have been known to attack people who harmed them many years previously. In the wild the African buffalo will live for 18-20 years, reaching maturity before the age of five and weighing a mighty 300-900kg with horns that grow up to 160cm long. They live in swamps, grasslands and even forests in the areas shown in the map (below) but require hugeamounts of water thus can mainly be found where water is always available throughout the year. They are capable swimmers and will often traverse rivers in search of better grazing. Buffalo herds vary in size from large savannah herds of 30-500 individuals living in a "range" of 26 to 1,075 square kilometres to much smaller forest herds of just 8-20 animals.

Forest buffaloes are also smaller in size with reddish brown coats compared with the black or dark brown coats of the savannah buffalo. The buffalo herd will move in a circular manner around the range allowing for vegetation to regrow. The female buffalo normally has offspring every two years from the age of 4-5yrs with a gestation period of 11-12 months and the children, once born, remain dependent on their mother for almost a full year. Female calves tend to remain in the herd permanently, whilst the males often leave by the age of four.

There are over a million buffalo in Africa with three quarters of them living in protected areas. As such, despite ongoing hunting, their survival is not a cause of concern unlike other members of Africa's Big Five club of animals. In fact they are much more susceptible to diseases such as Foot and Mouth (and, historically Rinderpest), than hunting either by humans or other mammals with only lions and crocodiles daring to take them on and then only in large numbers and when they think the buffalo is vulnerable. The African buffalo is a herbivore and lives mainly on grass and other green foodstuffs however if such nutrition isn't abundantly available, they lose their condition rapidly. As such, malnutrition is a major source of early death and they are rarely found living in areas with less than 10 inches of rainfall each year. The video (below) shows the African buffalo in its natural habitat.

Find out all about the animals of Africa with our comprehensive Africa animals information pages.

Watch LIVE webcams from national
parks across Africa and see Africa animals in their natural habitats.

Help keep animals in Africa safe by adopting an African animal and promote their welfare.

A growing collection of Africa resources from posters to screensavers, animal animations and more.